Uzbekistan imported 310 thousand tons of potatoes, worth $ 35.4 million, which is the highest figure for this period over the past two decades. The increase in potato imports contributed to price stability in the domestic market.

The previous record for potato imports in January-July was recorded in 2020. According to the State Statistics Committee, the imports of potatoes in 7 months of 2021 in volumes exceeded the imports in the previous year by 79.1 thousand tons, or 34%. 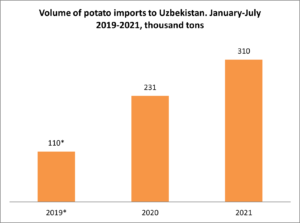 Note: data for 2019 is provided by EastFruit analysts, for 2020-2021 – provided by the State Statistics Committee of Uzbekistan

Almost the entire volume (99.7%) of potatoes imported to Uzbekistan in January-July 2021 was supplied from six countries:

There is almost no export of potatoes from Uzbekistan. According to the Customs Committee of the Republic, from the beginning of January 2020 to the end of July 2021, i.e. in more than 1,5 years, the total volume of potato exports amounted to only 2.9 thousand tons.

Over the past few years, the increase in potato imports has served as one of the factors that ensured price stability in the domestic market.

Recall that in January-June 2021, over 1.5 million tons of potatoes were produced in Uzbekistan, which is 3.5% more than in the same period last year. Along with the increase in the import volume to 310 thousand tons in January-July 2021, this explains the fact that the current prices are at the same level as in September last year. As of September 9, 2021, the average wholesale prices for potatoes in the capital markets of Uzbekistan were 3000 sum/kg ($ 0.28 per kg). On the same date in 2020, the average wholesale prices for potatoes were the same – 3000 sum/kg ($ 0.29 per kg).